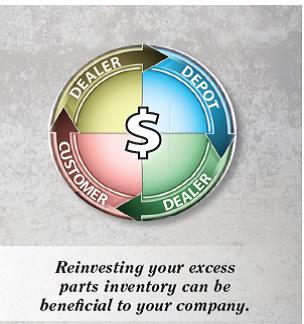 The "Depot" was incorporated in July of 1982 by four equipment dealers (three International and one John Deere) because they all shared a common problem, ridding their inventory of non-selling and non-returnable parts, yet still keeping the inventory available to their valued customers. The result.... the Parts Redistribution Program

The concept was easy enough. Equipment Dealers where going to be the key to our existence. They supplied our product and in turn we market and sell their scrap for a profit.

However, it took a determined man driving around to local dealers in his pick up truck to help launch the idea. Even though it was an honest program, it was not easy to talk people into selling their parts for 2 cents per pound. Then he had to convince them we would resell their inventory and promise to send a check. In December of 1982 the first pallet was loaded up from Seymour, WI and then shortly after 2 pallets from Minonk, IL and Ladd, IL. A total of 4900 pounds was our incoming for the first year in business.

1984: Incoming parts rose to 150 pallets and roughly 95,000 pounds. The concept was still a hard question in the dealer's minds. How can a company survive based on us selling our "junk" to them? Even more doubtful was the mysterious check that was suppose to arrive from the Depot every six months for parts sold. By the end of the year, $72,000 was sent out to the dealers in bonus checks.

1987: 800 pallets were received in to date. We reached a milestone during the year and hit 1 million in total sales and 1 million pounds received in. Total dollars returned to dealers reached $463,000. By the end of the year, "scrap parts" were occupying 52,000 square feet of space.

1988: More shortlines were added into the parts availability and we were doing business with 841 dealers. We made these lines available to all dealerships that sent in parts to us for the last 4 years.

2000: The Depot expanded into a family run business and the Father and Son team where now in the middle of the biggest expansion to date. A 60,500 square foot warehouse was completed, with an addition of 20,000 square feet of office space and shipping facility. Our New Website was up and running to link dealers directly to our inventory on hand. We had 6 employees in the office, 2 in shipping, and 12 people putting away parts and picking orders.

2006: We took in our largest return totals to date and had over 4,500 dealers sign up to do business with us. We sold our Main Street building in Chilton to purchase another 30,000 square foot building across the street from us in the industrial park in Chilton, WI.  That building had a nice office space and became home to our new sales and marketing team.

2007: More expansion was needed and we added a new location "Depot South." Paris, TN became our second distribution site and allowed us to service the southeast in 1-2 day service. Once we established ourselves, we purchased a 106,000 square foot building in McKenzie, TN to make our stay permanent.

The Parts Depot Today: Things have not slowed down even through the ups and downs of the economy and mother nature. Today the internet provides access to over 1.5 million unique part numbers and we handle over 50 different manufacturing lines. While technology has changed over the years and more options are available, our concept of Sell, Buy, Save has not. YOU are the key to our existence. YOU supply our product and in turn, we promise to work hard at providing options needed in today's dealerships for more moving capital, offering the BEST price on NEW OEM, so you can pass the savings on to your customers. We have become the competitive leader in parts redistribution and will continue to focus on gaining your trust and loyalty in the years to come.

Thank you for your continued support and as they say.......to be continued.